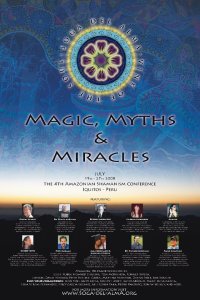 This 4th Amazonian Shamanism Conference will be opened by the illustrious visionary scientist, Dr.Dennis Mckenna. Other Presenters (with more confirming soon are – That master of sound healing- Dr. Richard Grossman, the brilliant entheo-scientist and lecturer, Ananda, the Indiana Jones of  Amazon Shamanism and noted journalist – Peter Gorman, the most excellent scientfic researcher on brain states while taking ayahuasca- Dr. Frank Echenhofer, the Amazon’s most famous visionary painter- Pablo Amaringo, the filmmaker and director Jan Kounen who brought us the documentary Other Worlds about ayahuasca and the Shipibo tribes and Renegade (Blueberry), specialist in Entheo-Religion and compiler of the book: Entheogens and the Future of Religion – Robert Forte, the intrepid Victoria Alexander speaking on her research of Medieval Mysticism and Its Empirical Kinship to Ayahuasca, the very profound Melvin Morse (invited but not yet confirmed) and his research into childrens near death experiences as well as his research on Myths, the renowned Dr. John Alexander and his years of training and research on Remote Viewing, one of the Director’s of Eagle’s Wing and author Howard G  Charing, Conference Organizer Alan Shoemaker speaking on 15 years in shamanism, the visionary artists Robert Venosa and Martina Hoffman two curanderas specializing in Huachuma (San Pedro) Wendy Luckey and Mary Ann Endowes Presenting as well as holding ceremonies, Elisa  Vargas Fernandez, the Shipibo curandera who works magic with her incredible icaros, and many more to be confirmed.

Since the late 90's I have organised journeys with Peter Cloudsley to the Amazon Rainforest and the Andes to work with the shamans and the sacred 'jungle doctors' (healing and visionary plants) of this area. I have written numerous articles about the Amazonian plant medicines, and have worked with some of the most respected shamans in the region. I was baptised into their tribe by the Shipibo Indians in the Amazon, and was initiated into the lineage of the maestros of the Rio Napo in the Upper Amazon. Co-authored the book Plant Spirit Shamanism, published by Destiny Books (USA) with a foreword by the great visionary artist Pablo Amaringo. Co-authored the book 'The Ayahuasca Visions of Pablo Amaringo', published by Inner Traditions (USA) April, 2011, presents a collection of never-before-published paintings by Amaringo. The book illustrated the evolution of Amaringo’s intricate art with 48 full-color reproductions, including detailed explorations of the rich Amazonian mythology underlying each painting. Now available - Fine art giclee prints and reproductions of Pablo Amaringo's beautiful work featured in the new book 'The Ayahuasca Visions of Pablo Amaringo'. http//ayahuasca_visions.imagekind.com
View all posts by Howard G Charing →